ABOUT
THE BEJA
PEOPLE

Historically, the two million Beja people are self-sufficient nomadic camel herders who live in the Red Sea Hills in Egypt, Sudan and Eritrea. The five Beja tribes have lived in this area for thousands of years, generally untouched by surrounding cultures or empires..

The Beja have a simple outdoor lifestyle, an oral culture, and distinct male and female roles. Men often wear a dark vest over a long robe, the women wear colorful dishdasha. They practice folk Islam. A very few have become followers of Jesus Christ.

There is a very strong family-clan-tribe unity that has provided solidarity during tough times. This unity is currently breaking down as families settle in urban areas for work, education or to access medical services. The traditional world view of the Beja can run counter to those of modern Sudan in areas like land ownership, conflict resolution, choosing a marriage partner, and knowing what's best. The mountainous, semi-desert region where the Beja live lies parallel to the coast between the Red Sea and the Nile River. It usually provides adequate pastureland for family clans to travel with their animal herds, but there are many miles of inhospitable sand and stone. These rugged hills may be 6,000' high. Rain is seasonal, and minimal, and droughts occur here. In addition, locusts may come during good years for crops. The weather is hot year-round. 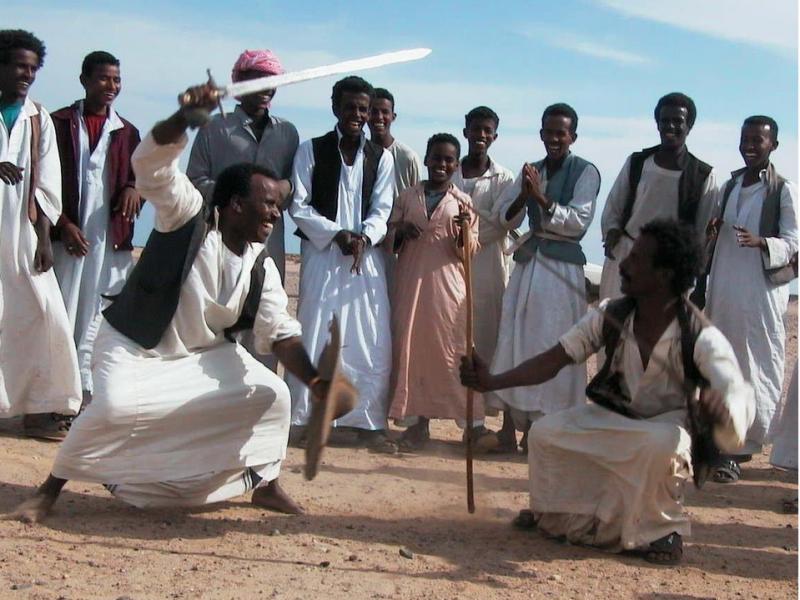 The majority of Beja speak various dialects of Bedawiyyet, although some Beja speak Tigre, and some speak Arabic as a second language. The Beja have lived in an oral culture, without written materials. Though the Beja dialects/languages are spoken by over one million people in Sudan alone, they have only recently been written down. The first books in Bedawiyyet were published in the late 1990's.

The Beja people traditionally have not been involved with modern politics, until the mid-1950's when the Beja Congress was created to attempt to bring attention to, and shed light on, the difficult situation in east Sudan to national government leaders. It was also a self-help charity. All lobby groups in Sudan were banned in 1958.

Some Beja were elected to seats in Parliament (in 1964) and some were given seats because of the peace agreement of 2006. Beja policies are regionally and tribally motivated, but at times they have partnered with other regional groups in attempts to bring attention to marginalized areas of the country. Published news items or analysis of the situation of the Beja are few, and international interest is low. The Beja continue to suffer from a lack of health and educational services, and job opportunities.